Waveform comparison of both AC and DC

In the above illustration we have the AC waveform on the left and the DC waveform on the right. Voltage is plotted vertically and identified as “U” on the graph so the higher the waveform, the greater the voltage. Time is plotted horizontally and identified as “R” on the graph. We can see a large gap between the two “humps” on the DC graph. That’s when the armature is in between the field coils and the generator isn’t producing any power. This is a characteristic of a DC generator. The graph on the left shows an AC waveform. In this case positive polarity is above the center line while negative polarity is below the center line. You get twice the power pulses, or “humps”, in an alternator as in a DC generator by eliminating those gaps between the humps. Adding built-in diodes to an alternator will rectify this current into DC current so that it can supply power to recharge the battery. The result is that an alternator is capable of higher outputs than a DC generator, especially at low RPMs, such as during engine idle time. In the case of 120 volt high voltage systems the devices are all designed to run on AC power so there is no need to rectify this current to DC. The only reason we still need to convert AC to DC in an automotive application is because you cannot mix AC and DC current. Automotive applications rely on a battery to provide power to crank the engine, provide extra reserve capacity when the alternator isn’t quite enough to meet temporary high demands, and to power accessories when the engine is not running. We mentioned the word “polarity” earlier. Polarity refers to whether or not a pole is positive or negative. We learned earlier that electrons flow from negative to positive so on a DC circuit they always flow in the same direction. A true AC circuit, such as a 120 volt AC circuit, has polarity that constantly shifts, or alternates. That’s why it’s called “Alternating Current”. Remember the earlier analogy of the parade of electrons passing by and giving a series of “high fives” to the light bulb in the DC circuit? In an AC circuit the electrons are constantly changing (alternating) direction. It’s as if they take one step, turn around and come back one step, then turn around and take that same first step over again – and repeat this little dance forever as if they really can’t make up their mind, sort of like a squirrel crossing the street in front of a vehicle. However, these electrons don’t die once used so as long as an electron passes by the light bulb, it will light up. With AC current it’s the same electron, rather than a parade, but it’s just dancing back and forth underneath the same light bulb filament. All the other electrons just act as a push-pull chorus line directing the movement of that electron. Therefore polarity really doesn’t exist in an AC circuit, unlike in a DC circuit, because it’s constant changing. You still need to have a complete circuit, just as in a DC circuit, but there is no positive or negative labeling involved. In a DC circuit the positive terminal is typically referred to as “hot” while the negative is called “ground”. In an AC circuit it’s still advantageous to refer to the wires by names so these terms are replaced by “hot” and “neutral” because there is no polarity and the higher voltages present require insulated return lines rather than a frame grounding return. Amps, Volts and Watts: Voltage is the force or pressure exerted upon the electrons to get them moving. As the voltage increases, so does the ability to make power. Low voltage doesn’t have very much force, which is why you can touch a small 9 volt battery with your finger and not even feel it. Touch it to your tongue however and you’ll know whether or not it’s dead because the current will flow through the saliva on your tongue, completing the circuit more easily than on your dry finger. Up that voltage to 120 volts and you’ll be the one that’s dead rather than any battery. Higher voltage is necessary to overcome the resistance in the conductor. Conductors such as copper wire are a great choice for wiring due to its low resistance and is commonly used in electrical circuits. Wire is used to conduct electricity to where it is supposed to go but in order to contain that electricity inside the wire it needs to be insulated. The insulation needs to be capable of preventing any short circuits between the inner conductor and anything that it passes nearby. As the voltage increases, the quality of the insulation also needs to increase. Automotive wire is commonly called low voltage wire because it’s good for handling 12 to 24 volts but it won’t contain a higher 120 volt current. High voltage wire, as used in residential construction, is available in two versions. The full version is rated at 600 volts while the junior version is rated at 300 volts. Either will work for a 120 to 240 volt AC circuit but the 600 volt wire has a thicker insulation capable of containing a higher level of voltage than the junior version. High voltage wire can be used in a low voltage situation but low voltage wire can never be used in a high voltage situation. 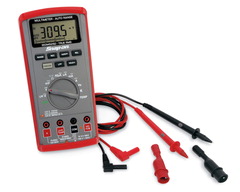 In the above pedestal image we can see three separate outlets. From left to right they are 50 amp, 30 amp, and 20 amp. Each receptacle has its own dedicated breaker sized for that particular outlet. This gives the RV owner the choice of choosing whichever outlet they need to best match their RV’s electrical service. But, before we delve into the available services we first need to understand what a split-phase service is. 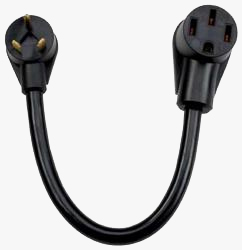 At times it becomes necessary to power an RV with a 50 amp service when there is no 50 amp NEMA 1450R receptacle available. Unlike the 30 amp NEMA TT-30R, the 50 amp outlet isn’t an RV-only receptacle so it can be found in residential and industrial applications as well and has a 4 prong outlet that has two hot wires – L1 and L2, as well as a neutral and ground wire. Any RV dealer or RV accessory store will offer an adaptor that is commonly referred to as a 30-to-50 dogbone adaptor, which is illustrated above. This adaptor will let you adapt your 50 amp plug to a 30 amp so that you can plug your 50 amp RV into a 30 amp RV receptacle if that’s all that is available. When you do this you’ll be limited to 30 amps of power though. The dogbone adaptor will connect the single 120 volt hot pole to both the L1 and L2 inputs of your RV’s 50 amp breaker panel. When you do this you will have the same phase across L1 and L2 so there will be no 240 volts available. But, seeing as how 99.9% of the RVs made don’t use anything with 240 volts that’s not a problem. In this situation all of the power will be going down the neutral wire. But, you are only sending 30 amps to the panel and your neutral wire is rated to handle 50 amps so you’ll be fine. You will have to be careful to manage your loads when running on 30 amps. If you fire up all of your air conditioners and water heater you are going to trip that 30 amp pedestal breaker real quick so you have to watch what you turn on. You can also add a second adaptor to change the 30 amp down to a 20 amp plug if you have to but then all you’re going to be able to do is keep the batteries charged and maybe run a few lights. That’s it for this month. Be sure to check out next month’s installment that covers transfer switches, generators, batteries and chargers, and low voltage circuits. We’ll explain how they work and how to test them should something fail.